Twitter is systematically silencing conservative voices but the official account for the designated terrorist organization, New People’s Army (NPA) is still active and they are using Twitter to disseminate terrorist propaganda and recruit more fighters. On top of that, multiple antifa groups have declared solidarity with this terrorist organization and are encouraging people to join.

Over the past few years, CPP/NPA has continued to carry out killings, raids, kidnappings, acts of extortion, and other forms of violence primarily directed against Philippine security forces. In May 2013, the Armed Forces of the Philippines reported that from 2011 through the first quarter of 2013, 383 people – including 158 civilians – were killed in encounters between CPP/NPA and government forces. 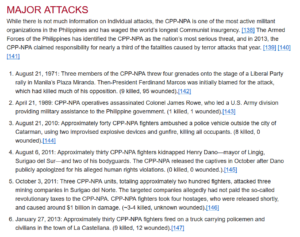 These extremist organization routinely use their Twitter account to brag about their terror attacks and how many people they have killed:

9 AFP troopers killed, 14 wounded in a series of military actions launched by NPA-NCMR.

11 killed, 3 wounded in an ambush by NPA-Masbate,

They also use Twitter to share propaganda images and to distribute recruiting materials directly to their followers:

This terrorist organization is currently running a #JoinTheNPA recruiting campaign in honor or of their 50 year anniversary of terrorism and several US based antifa groups are helping them recruit.

For The People – STL:

They also have received support from their “comrades” In Oregon but we are unsure what specific group this was from:

Does this terrorist organization that actively recruits on Twitter not violate their Terms of Service? Surely if Milo Yiannopoulos, Roger Stone, Gavin McInnes, Alex Jones, and others were in violation of Twitter TOS, then this designated terrorist organization that has murdered hundreds of people should have their account suspended as well, right? The fact that they have not is one of the most damning examples of Twitter’s ideological bias in favor of the left. But the most alarming takeaway from all of this is the growing collaboration between far-left extremist groups like antifa and foreign terrorist organizations.