If you’ve been following the Antifa movement you might have noticed a growing theme of “solidarity” with the Rojava revolution. Key Antifa organizing platforms like It’sGoing Down, Sub.media, Insurrection News, and CrimethInc. routinely share interviews and battle updates and were all instrumental in promoting the launch of the International Revolutionary People’s Guerrilla Force (IRPGF) in May of this year.

Fighting the Islamic Supremacists of ISIS is commendable but that does not negate the fact that the pictured fighters are part of a Marxist-Leninist, communist collective of soldiers fighting under the banner of the International Freedom Battalion (IFB). Replacing one murderous, authoritarian ideology with another is not a solution. In this case, the enemy of our enemy is most certainly not our friend. 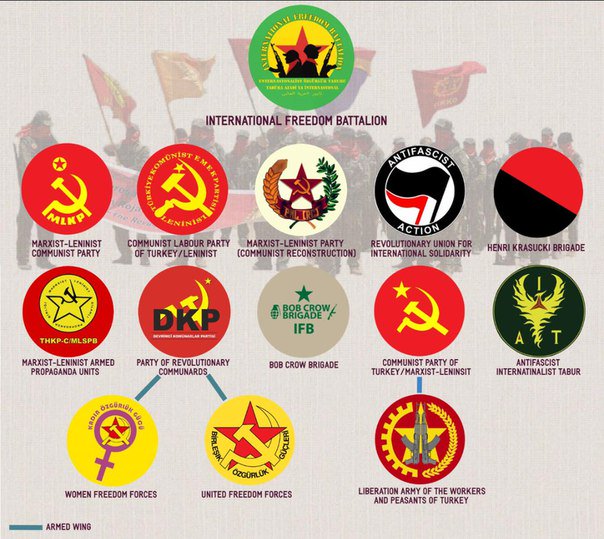 One particular Antifa group that has been championing the cause of foreign communist soldiers is Revolutionary Abolitionist Movement (RAM). As we previously reported, RAM is a heavily armed, extremely militant, group that routinely hosts anti-police workshops.

The RAM Philadelphia cell recently stated “Today, we find a common ground and we fight for the same revolution“. Considering there are no ISIS fighters in Philadelphia, who exactly do they intend to engage militarily? The police they view as their “enemies in blue”? The people whose property they plan to confiscate? People who identify as capitalists? It’s unclear who will be the next victim of Antifa’s targeted violence. But by making sure the Philadelphia Police Department are aware of RAM and their proclivity towards violence, we may be able to prevent more bloodshed. You can submit a tip anonymously here.

Help us launch our Extremist Spotlight Series by donating to our Patreon account.